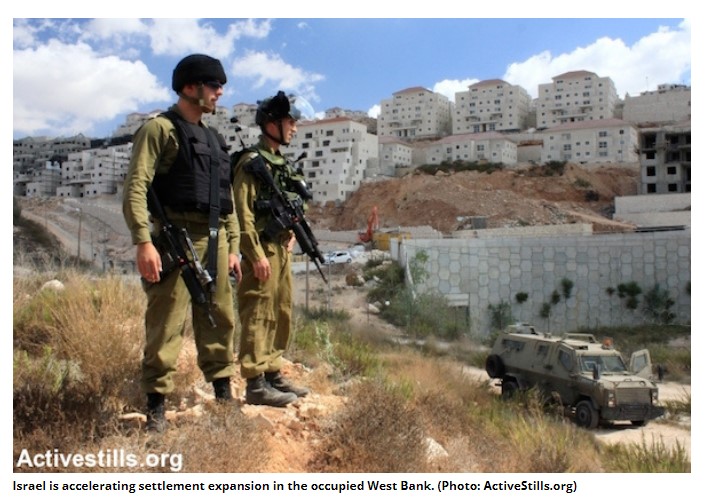 By Dr. Ramzy Baroud for the Palestine Chronicle:  The international uproar in response to Israel’s approval of a massive expansion of its illegal settlement enterprise in the occupied Palestinian West Bank may give the impression that such a reaction could, in theory, force Israel to abandon its plans. Alas, it will not, because the statements of ‘concern,’ ‘regrets’, ‘disappointment’ and even outright condemnation are rarely followed by meaningful action.

True, the international community has a political, and even legal, frame of reference regarding its position on the Israeli occupation of Palestine. Unfortunately, however, it has no genuine political mandate, or the inclination to act individually or collectively, to bring this occupation to an end.

This is precisely why the announcement on October 27 by Israel that it has given a ‘final approval’ for the building of 1,800 housing units and initial approval for another 1,344 will unlikely be reversed anytime soon. One ought to keep in mind that this decision came only two days after an earlier announcement that the Israeli government had advanced construction tenders for 1,355 housing units in the occupied West Bank.

Israel has rarely, if ever, reversed such decisions since its establishment on the ruins of historic Palestine. Moreover, since Israel’s occupation of Palestinian East Jerusalem, the West Bank and Gaza in 1967, Israel’s colonial project has remained in constant and unhindered expansion. 54 years should have been enough for the international community to realize that Israel has no intentions whatsoever to end its military occupation on its own accord, to respect international law and to cease construction of its illegal settlements.

Yet, despite this obvious fact, the international community continues to issue statements, moderate in their language, at times, even angry at others, but without ever taking a single action to punish Israel.

A quick examination of the US government’s reaction to the news of settlement expansion tells of the lack of seriousness from Washington towards Israel’s continued disregard of international law, peace and security in the Middle East.

“We strongly oppose the expansion of settlements,” said US State Department spokesman, Ned Price, adding that the Israeli decision is “completely inconsistent with efforts to lower tension and ensure calm.”

Since when was Israel concerned about ‘lowering tensions’ and ‘ensuring calm’? If these were truly important US demands and expectations, why then, does the US keep funneling billions of dollars a year in military aid to Israel, knowing fully that such armaments will be used to sustain the illegal Israeli occupation of Palestine and other Arab lands?

If, for the sake of argument, we assume that Washington is finally shifting its policies on Israel and Palestine, how does it intend to pressure Israel to cease settlement construction? Mr. Price has the answer: The Biden Administration would “raise our views on this issue directly with senior Israeli officials in our private discussions”, he said on October 26. “Raise our views”, as opposed to demanding accountability, threatening retaliation, or, God forbid, withholding funds.

While it is true that the US government is Israel’s main western benefactor, Washington is not the only hypocritical administration in this regard. The Europeans are not fundamentally different, despite the fact that their statements might be a tad stronger in terms of language.

“Settlements are illegal under international law and constitute a major obstacle to the achievement of the two-state solution and a just, lasting and comprehensive peace between the parties,” read a statement issued by the office of EU foreign policy chief, Josep Borrell, on October 29.

The statement mirrors the exact sentiments and language of numerous statements issued in the past, ones that “strongly reject” the Israeli action, and “urge” the Israeli government to “revoke” its recent decisions for the sake of “sustainable peace”, and so on. One may even muse to claim that the task of preparing these statements must be the easiest of all clerical work at the EU offices, as it is largely a matter of a simple ‘cut and paste’.

Yet, again, when it comes to action, Brussels, like Washington, refrains from taking any. Worse, these entities often bankroll the very action they protest, while insisting that they are standing at the exact same distance between Israelis and Palestinians, assigning themselves such roles as “honest peace brokers”, “peace mediators” and the like.

One should not be in the least surprised by Israel’s recent announcement. In fact, we should expect more settlement expansion and even the construction of new settlements, because that is what colonial Israel does best.

Within a matter of a few days, Israel has announced its intentions to build, or start bids for, nearly 4,500 settlement units. Compare this number with the settlement expansion during Donald Trump’s term in office. “Israel promoted plans for more than 30,000 settler homes in the West Bank during the four years (Trump) was in power,” the BBC reported, citing an Israeli group, Peace Now, as saying in its recent findings.

Those figures in mind, if the Israeli government under Naftali Bennett continues with this hurried pace of illegal housing construction, it could potentially match – and even overtake – the expansion that took place during the terrible years of the Trump era. With no accountability, this catastrophic political paradigm will remain in place, irrespective of who rules Israel and who resides in the White House.

Israel is doing what any colonial power does. It expands at the expense of the native population. The onus is not on colonial powers to behave themselves, but on the rest of the world to hold them accountable. This was true in the case of the South African Apartheid and numerous other examples throughout the Global South. It is equally true in the case of Israeli Apartheid in Palestine.

The truth is that a thousand or a million more statements by western governments will not end the Israeli occupation, or even slow down the pace of Israeli military bulldozers as they uproot Palestinian trees, destroy homes and construct yet more illegal colonies. If words are not backed by action – which is very much possible, considering the massive military, political and economic leverage the West wields over Israel – then the West remains a party in this conflict, not as a ‘peace broker’, but as a direct supporter of the Israeli occupation and apartheid.