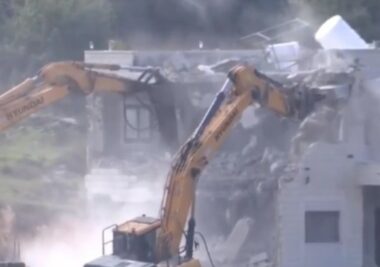 On Tuesday, Israeli soldiers demolished a Palestinian home in Kafr Ed-Deek town, west of Salfit, in the central West Bank.

They added that the soldiers stormed the property, forced Ibrahim and his family out, and demolished it for being built without a permit from the so-called “Civil Administration Office,” the administrative branch of the illegal Israeli occupation.

The soldiers also detained a young man, Husam Mezher, and released him after conducting the demolition.

The soldiers fired many gas bombs and concussion grenades at Palestinians who gathered there.

In related news, the soldiers invaded Anata town, northeast of the occupied capital Jerusalem, in the West Bank, and demolished four structures and several retaining walls.