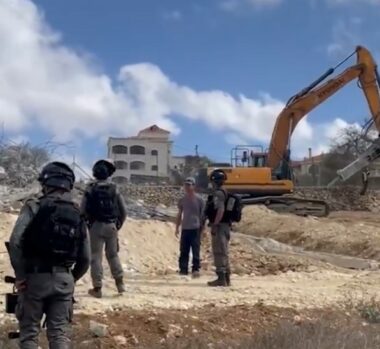 Israeli soldiers demolished, on Monday evening, a Palestinian home in the western area of Hebron city, in the southern part of the occupied West Bank; earlier Monday, the soldiers also demolished an under-construction home southwest of Hebron.

The Israeli army claimed the two-story home, its surrounding walls, and the well were all built without a permit from the “Civil Administration Office,” of the Israeli military occupation.

The sources added that the family recently built the property, and just finished furnishing it before the army demolished it.

On Monday morning, the soldiers demolished an under-construction home in the Sika village, southwest of Hebron.