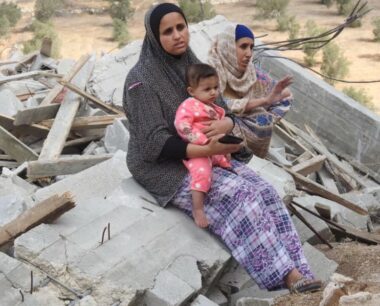 The Alliance For Human Rights, a nonviolent activist group that documents Israeli violations, has reported that the soldiers and personnel of the so-called “Civil Administration Office,” invaded the village and demolished the under-construction home of Ahmad Jawa’da.

The Palestinian was building the home on his property to provide shelter to his family of seven, including children, but the army claimed the home was being constructed without a permit from the Civil Administration Office, the administrative branch of the illegal Israeli occupation.

The invasion and the demolition led to protests before the soldiers fired gas bombs and concussion grenades.

The WAFA Palestinian News Agency quoted Walid Hshaish, the head of the Sika Village Council, stating that “Israel has constructed a section of the apartheid wall, confiscating hundreds of dunams of the villagers’ farmland for colonial settlement activities and pushing the villagers into a crowded enclave, a ghetto, surrounded by walls, settlements and military installations.