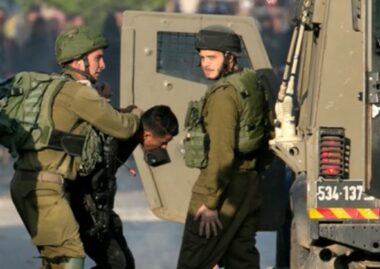 Several Palestinian civilians from across the occupied West Bank were detained by the Israeli army, Sunday evening and overnight Monday, local sources reported.

A 70-year-old Palestinian writer and former political prisoner, identified as Ahmad Qatamesh, was detained by the army after invading his home in al-Bireh city, in central West Bank, north of Jerusalem.

In Turmus Ayya town, north of Ramallah city, in central west Bank, soldiers stormed the home of another Palestinian civilian, and detained him.

Israeli forces invaded and searched the home of a former prisoner in the al-Tireh neighborhood in Ramallah city.

Sources confirmed the detention of a Palestinian teenager in Beit Fajjar town, south of Bethlehem, in central West Bank.

South of Nablus in northern West Bank, another Palestinian resident of Silat al-Harithiya village, northwest of Jenin, was detained as he attempted to cross the Za‘atar military roadblock.

Lastly, one Palestinian was detained from the Damascus Gate (Bab al-Amoud) at the entrance to the old city of Jerusalem.