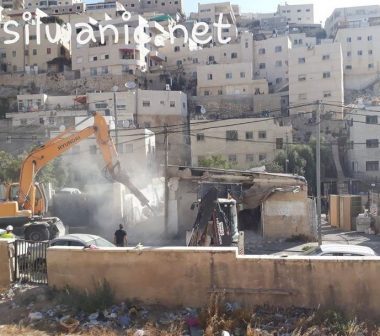 Israeli soldiers demolished, Wednesday, a Palestinian print shop in Ein al-Louza neighborhood in Silwan, south of the Al-Aqsa Mosque in occupied Jerusalem, and demolished a print shop, in addition to abducting two Palestinians after assaulting and wounding them.

The Wadi Hilweh Information Center in Silwan (Silwanic) said dozens of soldiers accompanied personnel of the Jerusalem City Council, and several bulldozers, invaded the town and demolished the property.

It added that the City is claiming that the building was constructed without a permit; the owners have been filing appeals with the City Council.

During the destruction of the property, the soldiers attacked and injured many Palestinians, including children and women, and abducted two young men, identified as Ezz Somrain and Tareq Roweidi.

While the Palestinians continue to be denied construction permits despite the heavy costs of the applications, and continue to be facing excessively-high fines and fees, Israel continues to build and expand its illegal colonies, in direct violation of International Law, and the Fourth Geneva Convention.

In addition, dozens of soldiers invaded Beit Rima town, northwest of the central West Bank city of Ramallah, and abducted a young man from his home.