Army Demolishes Two Homes, Foundation Of One, In Jerusalem 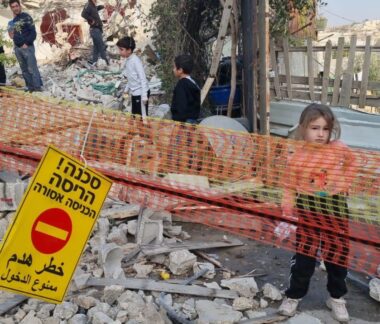 Israeli soldiers demolished Tuesday, two Palestinian homes, and the foundation of a third home, in the occupied Palestinian capital, Jerusalem, in the West Bank.

Local sources said several army jeeps and bulldozers invaded Jabal al-Mokabber town, southeast of Jerusalem, and demolished a home, owned by Ata Ja’fara, allegedly for being built without a permit.

Ja’far said that his home, only 90 square/meters, was demolished for the first time in the year 2010 before he rebuilt it to provide shelter for his eleven family members.

“Now, we are homeless, my children have no place to sleep and feel secure, especially in winter,” he added, “We tried to obtain all needed permits, and we paid the City Council a lot of money, but they just want to demolish the property no matter what.”

In addition, the soldiers demolished another Palestinian home, owned by members of the local Husseini family, near Bab al-Magharba, in occupied Jerusalem.

The soldiers also demolished the foundations of another home in the Shayyah area, in the at-Tour, in the eastern part of Jerusalem.

It is worth mentioning that a month ago, the Burqan family had to demolish its property to avoid the excessively high fines and fees, and today, Tuesday, the soldiers invaded the area and removed the remaining foundations of the property.

The owner of the property, the mother of Eyad Burqan, said the family had to demolish its two-story building this past November, to avoid having to pay more than 400.000 Shekels fines, and added that the army demolished the remaining foundations to force us to pay the expenses and demolition costs.

She also said that the demolished property provided shelter to twenty Palestinians, including her four sons and their children.