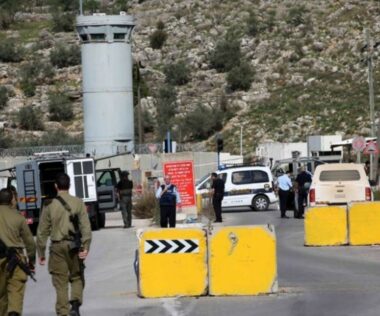 Israeli soldiers shot, on Tuesday evening, a Palestinian child near Ennab military roadblock, east of Tulkarem, in the northern part of the occupied West Bank.

Eyewitnesses said the soldiers shot the child, only 14 years of age, with a live round in the thigh.

They added that there were no protests in the area and that the soldiers fired live rounds at several children who gathered in the area to force them away, wounding the child.

Medical sources said the child was rushed to a hospital in Tulkarem and described his wounds as moderate.

In Ramallah, the central West Bank, the soldiers invaded Bil’in village, west of the city, leading to protests, and fired many gas bombs and concussion grenades, causing several injuries.

Furthermore, the soldiers injured several Palestinians at the main entrance of the al-‘Arroub refugee camp, north of Hebron, in the southern part of the occupied West Bank.

In addition, the soldiers uprooted 120 Palestinian trees on three Dunams of lands, and demolished a well, south of Hebron.