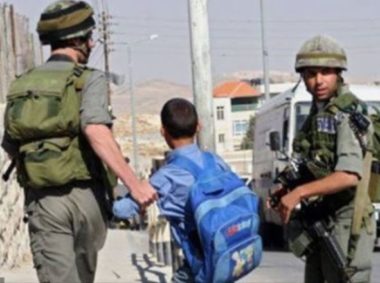 Israeli forces detained, Monday, several Palestinian civilians from the occupied West Bank, including an eleven-year-old child and a university student, according to local sources.

East of Ramallah, soldiers detained one Palestinian, identified as Khaled Nawabit from the town of Burqa after storming and vandalizing his home.

To the west of Ramallah, Israeli troops invaded Ni’lin, Deir Qadis, Kharbatha Bani Harith, and Bil’in towns, and forcibly entered several Palestinian civilian homes, including that of a former prisoner without making any arrests.

Israeli intelligence agents and soldiers stormed the occupied East Jerusalem neighborhood of Al-‘Isawiya, where they invaded and ransacked several homes and detained four Palestinians, including a child.

They were then transferred them to the Al-Moskobiya interrogation center in West Jerusalem, according to the Wadi Hilweh Information Center (Silwanic).

WAFA added that soldiers set up flying military roadblocks for Palestinian traffic at the entrance of Sa`ir town and Halhul town, in the city of Hebron.