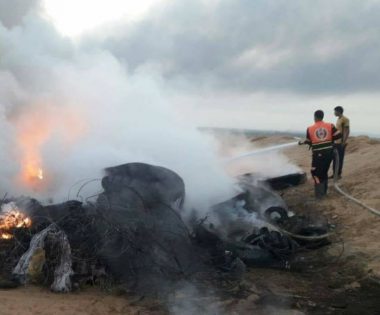 An Israeli army drone dropped, early on Friday morning, firebombs at protest tents, in one of the Great Return protest camps in Rafah, in the southern part of the Gaza Strip.

The firebombs caused fire to the tents, and burnt dozens of tires around them which were prepared to be used during the upcoming protest, on Friday afternoon.

The Israeli fire bombs caused fire in several other tents, in the same area; the attack led to property damage, but no injuries.

The Higher Committee for the Great Return March, said the Israeli attacks yet another indication that the Israeli army is desperate due to its failure on stopping the processions despite the use of sniper fire against the unarmed protesters, and the large casualties among the Palestinians.

It added that the Palestinians are demanding their legitimate, internationally guaranteed rights of liberation, independence and the Right of Return of the refugees.

It is worth mentioning that the army has killed 123 Palestinians, including 13 children, in the Gaza Strip, and injured more than 13672 others, including hundreds who suffered serious wounds, mainly after being shot with expanding bullets, since March 30th.

Among the slain Palestinians is a medic, identified as Razan Ashraf Najjar, 22, who was fatally shot after the soldiers targeted her and four other medics providing treatment to wounded Palestinians, in a field hospital in Rafah, in the southern part of the coastal region.

The soldiers also injured 223 medics, including 29 who were shot with live fire or after being targeted by high-velocity gas bombs.

Among the casualties are two journalists, identified as Yasser Mortaja, 31, and Ahmad Abu Hussein, 25, who were killed by Israeli army fire, and 144 others were injured.