Army Fires At Farmers And Workers In Gaza 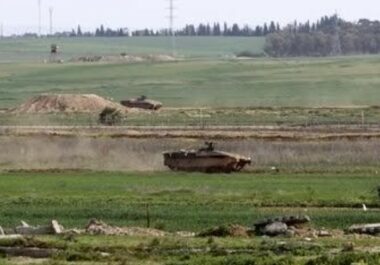 On Monday evening, Israeli soldiers fired a barrage of live rounds at farmers and workers on Palestinian lands in Khan Younis and al-Maghazi, in the besieged Gaza Strip.

Media sources said the soldiers, stationed on military towers across the fence east of Khan Younis, in the southern part of the Gaza Strip, fired a barrage of live rounds and gas bombs into the Palestinian lands east of Khuza’a town, east of Khan Younis, forcing the farmers to leave their lands in fear of further Israeli escalation.

The sources added that the soldiers also fired many live rounds and gas bombs at Palestinian workers on lands east of the al-Maghazi refugee camp, in the central district of the Gaza Strip.

The workers were at a construction site when the soldiers started firing the live rounds and gas bombs, forcing them to leave. Local sources said a high-velocity gas bomb struck a Palestinian car in the area, causing damage.

On Monday morning, several Israeli military vehicles invaded Palestinian agricultural lands near the perimeter fence in Beit Hanoun, in the northern part of the Gaza Strip.