Army Hands Family An Order For Demolishing Their Home 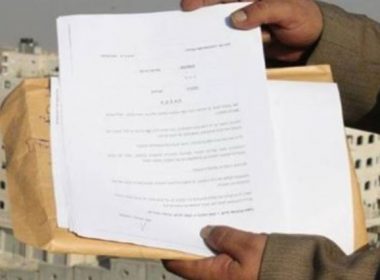 Dozens of Israeli soldiers invaded, on Monday at dawn, Kobar village, northwest of Ramallah in central West Bank, and handed a demolition order against the family home of a Palestinian, who was killed in July on this year, after killing an Israeli colonialist settler.

Media sources in Ramallah said the soldiers surrounded the village, before invading it, and handed the order to the family of Mohammad Tareq Dar Yousef, 17.

It is worth mentioning that Mohammad was killed June 26th, 2018, after he managed to climb over the fence into the illegal Israeli settlement of Geva Binyamin, which had been built on Palestinian lands taken from Kobar, and stabbed three people, killing one, identified as Yotam Ovadia, 31, before he was shot and killed.

The policy of demolishing the homes of Palestinians who carried out, or suspected of carrying out attacks against Israelis, including soldiers and settlers, is an act of collective punishment, illegal under International Law.