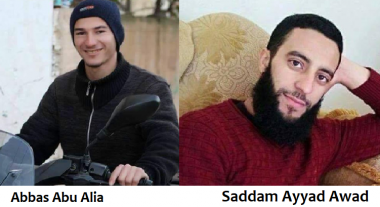 The Palestinian Prisoners’ Society (PPS) has reported that two detainees in Israeli prisons have declared a hunger strike, protesting their continued detention under Administrative Detention orders, without charges or trial.

The PPS said that the two detainees have been identified as Saddam Ayyad Awad, 28, from Beit Ummar town, north of the southern West Bank city of Hebron, and Abbas Abu Alia, 21, from the al-Mughayyir village, northeast of the central West Bank city of Ramallah.

It added that the two are protesting their continued imprisonment under Administrative Detention orders, demanding to be released or sent to court.

The PPS stated that Awad was repeatedly abducted and imprisoned by Israel since the year 2009, and spent a total of seven years in prison.

He was one of the detainees who were releases under the 2011 prisoner swap deal, but was abducted again, and was held captive for four years.

In April of this year, Awad was abducted by the soldiers and was slapped with an Administrative Detention order.

In addition, detainee Abu Alia has been held under Administrative Detention orders for the past fourteen months, and recently received another order for four additional months.