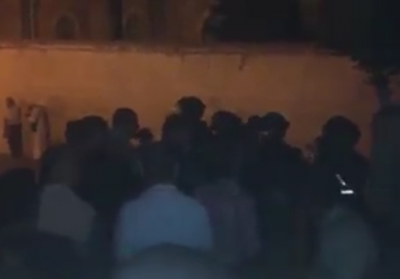 Israeli soldiers and police officers assaulted, on Sunday evening, dozens of Palestinians who gathered for evening prayers near the Bab al-Asbat (The Gate of the Tribes), in occupied East Jerusalem, wounding 21 of them, after preventing them from entering Al-Aqsa Mosque.

The Palestinian Red Crescent Society (PRCS) said the soldiers shot and injured fifteen Palestinians with rubber-coated steel bullets, and that six of them suffered moderate wounds that required moving him to a hospital for further treatment.

The PRCS added that the soldiers also assaulted many Palestinians, causing various cuts and bruises to at least six.

Also on Sunday, the soldiers abducted two Palestinians from East Jerusalem, after stopping and searching their car, and locating what the army described as “dangerous fireworks.”