Army Injures 29 Palestinians Near Jerusalem, Abduct One Near Jenin 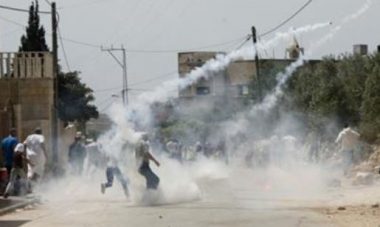 Israeli soldiers invaded, on Wednesday at night, Abu Dis town, east of occupied East Jerusalem, and clashed with local youths, wounding three with rubber-coated steel bullets, and causing twenty-six others to suffer the severe effects of teargas inhalation. The soldiers also abducted one Palestinian near Jenin.

The Palestinian Red Crescent in occupied Jerusalem said its medics rushed to Abu Dis town, and providing the needed treatment to three Palestinians, who were shot with rubber-coated steel bullets, and 26 others who suffered the severe effects of teargas inhalation.

In addition, the soldiers installed a military roadblock on the main Jenin-Nablus road, searched many cars and interrogated many Palestinians while inspecting their ID cards, before abducting a young man, identified as Amjad Jamal Milhem, 22.

The Palestinian was on his way back home in Kufur Ra’ey town, south of Jenin, in the northern part of the occupied West Bank.