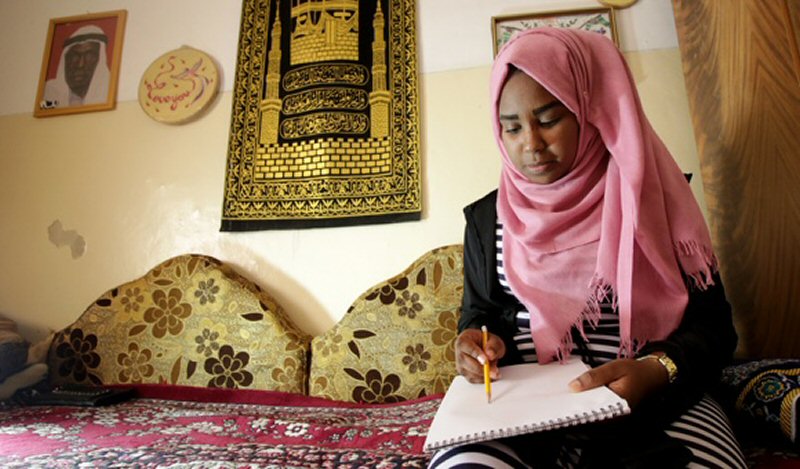 Maiysa Zawaydeh, 15, draws in her sketchbook beneath a portrait of her grandfather in her family home in Jenin refugee camp, West Bank, May 11, 2017. (Photo: DCIP / Ahmad Al-Bazz)

As summer begins in Jenin refugee camp, 15-year-old Maiysa Zawaydeh is wary of the coming months. “Unfortunately, there is no safe place to play in the camp,” Maiysa told Defense for Children International – Palestine. With no public gardens and only one playground, Maiysa says, “I spend most of my time in the house trying as much as possible to distract myself.”

The 15-year-old twists a watch around her wrist, soft-spoken as she details her life in the camp. Born in 2002 amid the turmoil of the second Intifada, or uprising, Maiysa is part of the third generation to grow up in what was intended to be a temporary emergency living space nearly seven decades ago.

She has spent most of her life in a two-bedroom home crowded with six children and three adults, all descendants of her grandparents who were forcibly displaced from the town of Ramle during the establishment of Israel in 1948. Their hometown has been under Israeli sovereignty since, less than 65 miles southwest of where Maiysa lives today. 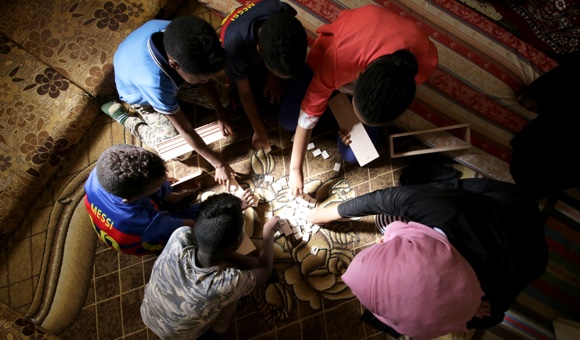 Maiysa plays with her siblings in her living room in Jenin refugee camp, West Bank, May 11, 2017. (Photo: DCIP / Ahmad Al-Bazz)

Israeli law prevents her family from returning. The absence of a political solution to their displacement packs them alongside an estimated 14,000 refugees who now live within a 0.42 square kilometer (0.16 square mile) plot of land in the northern West Bank. The camp was initially established in 1953 to accommodate Palestinians expelled from more than 50 villages, numbering 8,450 before March 1967, according to the United Nations Relief and Work Agency (UNWRA).

Overcrowding and fifty years of Israeli military occupation, as well as the now-frequent Palestinian security forces’ raids, have negatively impacted the available spaces for play. When schools let out for the summer, children spend their time between camp spaces that are either too cramped or too dangerous for play.

With one of the highest unemployment rates in the West Bank, indoor spaces in the summer often include unemployed adults sharing small quarters with out-of-school children and youths.

Children who play outdoors in the camp’s public areas are exposed to conflict-related violence, intra-communal violence, drug abuse and other risky behaviors, according to UNRWA. 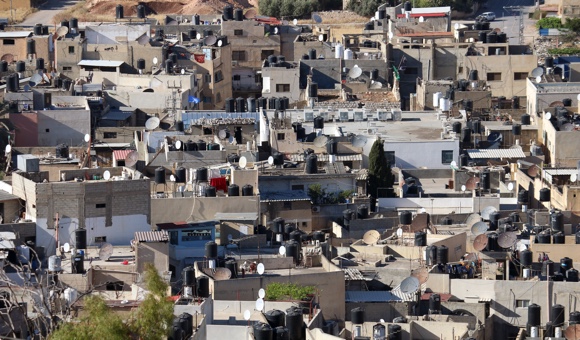 Established with 50 shelter units, the number of housing units in Jenin refugee camp grew to 1,280 by 2007, according to UNRWA. (Photo: DCIP / Ahmad Al-Bazz)

Farha Abu Hijja, who runs a center for refugee women and children, told DCIP that a lack of safe public play spaces for children has detrimental impacts on their ability to cope with trauma induced by Israel’s military presence in the camp.

“The situation is exacerbated by the night raids carried out by the Israeli occupation army, which includes shootings and blowing up doors, causing great fear among children,” Abu Hijja told DCIP.

Although Jenin refugee camp has an array of services and centers for children, Abu Hijja said that even these places struggle to meet the needs of the camp’s booming youth population, which accounts for 40 percent of the camp’s total residents.

Maiysa pointed out that most of the designated spaces for children around the camp require entrance fees. Like many in the camp, she said her family could only afford these fees on rare occasions. 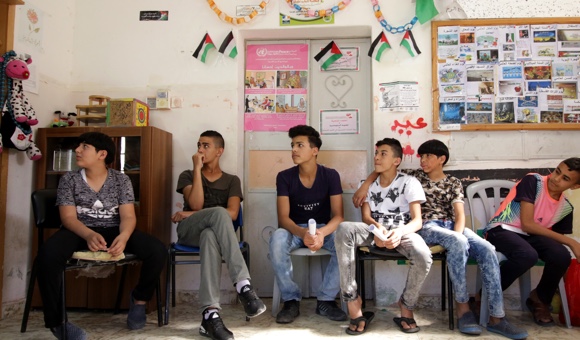 Ahmad Ighbariyeh, 16, takes part in a discussion during a workshop held at the Not To Forget Society in Jenin refugee camp, West Bank, May 11, 2017. (Photo: DCIP / Ahmad Al-Bazz)

Sixteen-year-old Ahmad Ighbariyeh is veteran to the camp’s streets. His father died during an Israeli military incursion in 2002. When he’s not in school, Ahmad says he spends most of his free time playing football in narrow camp alleyways.

Other children in the room, gathered in a tattered community center for a session on how to respond to rights violations that take place during armed incursions, listen intently when Ahmad speaks.

“Because we do not have playgrounds in the camp, we play in the street but this is very dangerous,” Ahmad told DCIP, relaying a story of a friend once injured by a passing vehicle. 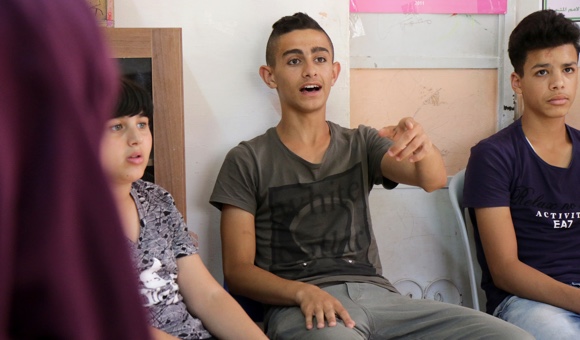 Ahmad sits next to his friends during a workshop held at the Not To Forget Society in Jenin refugee camp, West Bank, May 11, 2017. (Photo: DCIP / Ahmad Al-Bazz)

Paved roadways in the camp are packed by some 200 parked vehicles further crowding the busy streets, and nearly half of alleyways are in need of rehabilitation, by UNRWA’s estimates.

Flooded by cars in the day, the streets where children ride bikes and play games become the site of frequent violent incursions by both Palestinian security forces and the Israeli military, increasing the risk of arrest or injury to children.

Earlier this year, in February, Israeli forces shot a 17-year-old in the back during a predawn raid.

UNICEF typically mandates the creation of Child Friendly Spaces (CFSs) in refugee camps across the world, in order to “give[e] a child a sense of normalcy amid chaos.”  CFSs are designated “safe spaces” for children during crisis or emergency, and also carry the goal of being points of service delivery. 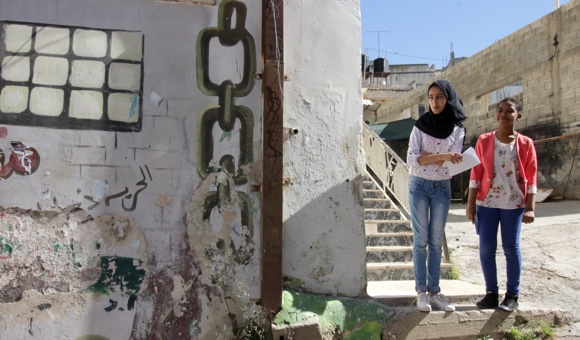 Two Palestinian girls stand on the steps of the Not To Forget Society’s building in Jenin refugee camp, West Bank, May 11, 2017. (Photo: DCIP / Ahmad Al-Bazz)

Maiysa’s and Ahmad’s access to safe spaces hangs in limbo: their situation is not considered temporary or an emergency, regardless of the fact that they still hold refugee status and experience violence on a near-daily basis.

UNRWA spokesperson Chris Gunness told DCIP that UNRWA does not designate Palestinian refugee camps in the West Bank as under emergency, and as such has not set the creation of CFSs as a priority.

Gunness said the lack of CFSs in Palestinian refugee camps has a “negative protection impact on children,” including exposure the risk of death and injury, drug addiction, sexual exploitation and abuse, psychological damage, and negative impacts on children’s educational attainment. 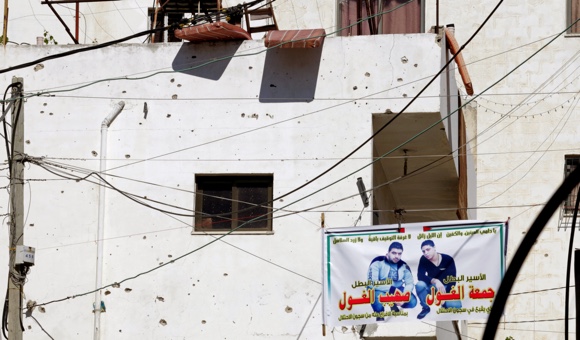 Abu Hijja, for her part, told DCIP that psychological issues resulting from armed raids and lack of protection would be alleviated with access to safer spaces for play.

Back in the Jenin refugee camp, Maiysa returns home to play inside with her siblings, while Ahmad heads outside to join his friends in a pick-up soccer game.

“I often dream of having a park for us to play in,” Ahmad told DCIP. “I would like to build a large playground to have all the children in the camp so they could play safely,” Ahmad said before he headed out to the street, ball in hand. 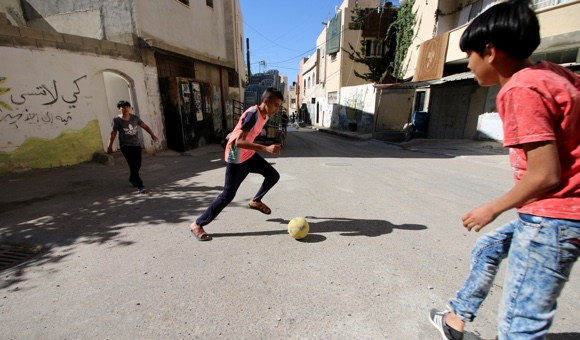 Palestinian children play soccer in the streets of Jenin refugee camp in the northern West Bank on May 11, 2017. (Photo: DCIP / Ahmad al-Bazz)