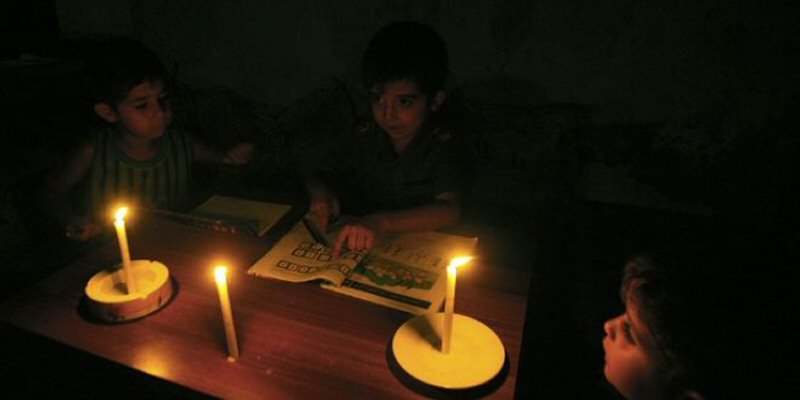 Israeli authorities implemented a third round of electricity supply cuts to the Gaza Strip on Wednesday — honoring a request from the Palestinian Authority (PA), which announced, last month, that it would drastically reduce its payments to fund the Hamas-run territory’s electricity bill — as the Egypt government started to deliver diesel fuel to operate Gaza’s only power plant.

Spokesperson for the Gaza Electricity Distribution Corporation Muhammad Thabet said Wednesday morning, according to Ma’an, that Israeli authorities reduced the output of the al-Shaaf grid, which feeds the Gaza City district, from 12 to 6 megawatts. The output of Line 8, which feeds the Khan Younis district in the southern Gaza Strip, was also reduced from 12 to 6 megawatts.

The 12-megawatt cuts came after output was reduced by 6 megawatts on Monday and 12 additional megawatts on Tuesday, meaning that the total output of Israeli electricity grids feeding the small Palestinian territory has been reduced from 120 to 88 megawatts in the last three days — representing about a 30 percent reduction in energy prior to the current crisis.

According to Thabet, Gaza’s some 2 million residents face just two to three hours of electricity every 24 hours as a result of the cuts.

Meanwhile, the Egyptian government have started to provide industrial-use diesel fuel to run the Gaza’s sole power plant, which shut down in April, when Gaza’s electricity officials said they could not afford a PA-imposed tax on diesel that doubled the price of operating the plant. The power plant has not run at full capacity in years, with Israel’s crippling blockade severely limiting fuel imports into the coastal enclave.

This left the Israeli power lines as the only reliable power source feeding the impoverished territory, since the power lines from Egypt that supply electricity to southern Gaza are often out of operation due to technical issues.

Witnesses in Gaza said they saw fuel tankers entering via Egypt’s Rafah border crossing, which was opened on an exceptional basis Wednesday morning to deliver the fuel.

Gaza’s Finance Minister Salim al-Kayyali told Ma’an that 11 fuel trucks carrying approximately 500,000 liters of diesel were delivered from Egypt to the power plant, adding that a million additional liters would be shipped on Wednesday evening or Thursday morning.

Undersecretary of the Hamas-run Interior Ministry in Gaza, Tawfiq Abu Naim, said, at a news conference at the Rafah crossing, that the Egyptians “promised to open the crossing and introduce additional facilitations,” though it remained unclear if he was referring to the additional entry of fuel, or to possible opening of Rafah to allow Palestinians trapped on either side of the border to cross.

While the PA has said that its decision to cut funds for electricity was a result of Hamas’ failure to reimburse the Ramallah-based government, critics have said the Fateh-led PA is actually trying to pressure its rivals Hamas to relinquish control of the besieged coastal enclave.

Gaza, which marked its 10th year under the Israeli enforced blockade last week, has struggled for years with power shortages due to limited fuel access and degraded infrastructure.

Egypt, the only other country sharing a border with Gaza, has also upheld the blockade since Abd al-Fattah al-Sisi overthrew the Muslim Brotherhood-led government, in 2013, and became president.

Many Gazans are prevented from leaving or entering the besieged coastal enclave, sometimes for months at a time, as Egyptian authorities only periodically open the Rafah crossing, stranding Palestinians on both sides of the crossing during closures. According to the United Nations, the crossing was opened only 44 days in 2016, and 21 days in 2015.

Egypt also recently attempted to pressure the Gaza government into cooperating with its harsh ‘counterterrorism’ crackdown in exchange for providing some direly needed electricity.

It remained unclear whether or not Wednesday’s provision of diesel fuel came as the result of any new developments regarding Hamas’ cooperation with Egyptian security authorities, though the two bodies have reportedly improved their relations, recently.

Chris Gunness, spokesperson for UNRWA, the United Nations agency for Palestinians refugees, highlighted in a statement Wednesday that before the current crisis, Gaza was already receiving less than half the 450-500 megawatts needed in the coastal enclave.
Gunness noted that “the grave impact” lack of electricity has on the delivery of basic services to the Gaza population, including the supply of drinking water, treatment of sewage, the availability of health services, businesses, schools, and most aspects of daily life.

He said that water quantity supplied to households, including drinking water, has decreased from 90 liters per capita a day to 40-50 liters per capita daily — nothing that the World Health Organisation recommends a daily average consumption of water to be at least 100 liters per person.

His statement also noted that Gaza’s Health Ministry has warned that 40 operating rooms and 11 gynecology operating rooms, which conduct about 250 surgeries daily, in Gaza, are now at risk — compounded by another financial crisis in the medical center as a result of the PA slashing funds for hospital equipment and medication.

“Six hours of electricity per day is not enough to complete the full treatment cycles of sewage water before being pumped into the sea,” Gunness wrote. “Therefore, more than 100,000 cubic meters of raw sewage or poorly treated effluent are being discharged into the sea daily.”

While UN Humanitarian Coordinator in the occupied Palestinian territory Robert Piper characterized the ever-worsening crisis in Gaza as “an internal Palestinian dispute,” rights groups have placed the bulk of the blame on the Israeli siege.

“This is not some sort of natural disaster,” Israeli NGO B’Tselem said. “Had that been the case, Israel would have likely sent in a humanitarian aid mission. Instead, the reality in Gaza is the result of Israel’s handiwork, achieved by its decade-long implementation of a brutal policy.”