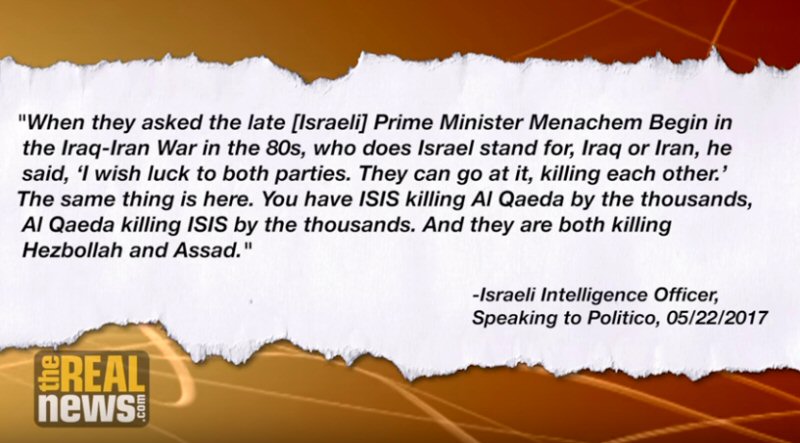 AARON MATÉ: It’s The Real News. I’m Aaron Maté. Of all the foreign countries involved in the Syrian proxy war, one that does not get much attention is Israel. We’ve known for years Israel has provided at least some support to anti-Assad Sunni fighters. This includes offering medical treatment to wounded Al-Qaeda fighters. Well, now a new report reveals a whole lot more. According to Syria Deeply, Israel has carried out an extensive operation backing militant groups near the border with northern Israel. This includes the provision of supplies and even direct financial aid. The report is called Israel’s Quiet Campaign to Gain a Foothold in Southern Syria. It’s by Nour Samaha, a freelance journalist based in Beirut. I spoke to her earlier today. Nour, welcome.

AARON MATÉ: We’ve known about Israel’s cooperation with or tacit support for Al-Nusra rebels in southern Syria for quite some time. Most of the focus has been on basically Israel treating wounded fighters in its hospitals. Your piece though goes into detail that I don’t think we’ve heard before. At least for a western audience. Can you explain what you found?

NOUR SAMAHA: Well, first off, it needs to be highlighted that it’s not just Nusra rebels, Nusra fighters that they’re treating, but, obviously, a variety of opposition rebels that are based in opposition-controlled Quneitra, which is along the border or along the technical fence with Israel. What the Israelis have been doing, and they’ve been doing it for several years now, is reaching out beyond humanitarian aid or medical support for fighters, but also distributing aid and educational equipment inside opposition-controlled Quneitra, as well as more recently, funding and arming their own opposition group. That opposition group is called The Golan Knights, or Liwa Forsan al Joulan in Arabic. They’re still relatively small, but they have admitted to accepting aid and arms from the Israelis. This is the first time that this sort of information has come out publicly. I think essentially what it is showing is that the Israelis, although they’re working quite quietly and they still maintain this policy of non-involvement inside Syria, are actually working very, very actively inside southern Syria in order to create an Israeli-friendly zone of influence.I think it’s, again, important to point out that not only is this reminiscent of what they did in Lebanon during the civil war, but they’re very keen on ensuring that there’s a buffer zone or a safe zone between them and the Syrian forces, and the Syrian government and its allies. In order to do that, they need to be able to make sure that the population, the local population in that area can help them out and is not hostile towards them.

AARON MATÉ: Can you explain further in terms of wanting to create that friendly buffer zone inside Syria? Because it’s very significant. Especially bringing up the comparison to southern Lebanon, where Israeli support for militant forces there has had deadly consequences.

NOUR SAMAHA: Well, in southern Lebanon basically what they did at the beginning of the war was they created, it’s called The Good Fence Policy. The idea was that they set up a liaison unit on the Israeli side of the border and they basically had an open door policy for Lebanese to come into Israel to receive free medical care to help them out in terms of employment.Eventually what it did was it opened up the possibility for the Israelis to actually be present inside Lebanon, and they then created their own militia, which was the Free Lebanon Army. Then they changed it to the South Lebanon Army. This militia basically controlled southern Lebanon under Israeli guidance. The South Lebanon Army and the Israelis were working side by side in southern Lebanon in order to ensure that it was an area that was productive and helpful for the Israelis.Now, what we’re seeing in Syria is something very, very similar to what they did in southern Lebanon. They want to create this Israel-friendly zone. I think the mistake that they … I think they’ve learned from their mistakes in Lebanon. I do not think that the Israelis are keen on putting boots on the ground inside Syria. What they would rather have are people that do their bidding for them. What we’re seeing are buses going in and out on a daily basis. Bringing in injured, and wounded, and sick from opposition-held southern Syria into Israel. You have civilians and fighters that can stay up to a year and a half inside Israel hospitals. They’re creating this relationship with the population, like I said, in order to have this Israel-friendly environment, Israel-friendly society.

AARON MATÉ: Part of that, I imagine for Israel too, is establishing a buffer zone that would help it consolidate its annexation of the Golan Heights, which it occupied 50 years ago in 1967.

NOUR SAMAHA: 100%. It’s an absolute … It’s a great plan for the Israelis if you will because, like you said, they’ve occupied the Golan Heights. They considered it to be annexed and part of Israel. The international community has not recognized that. They do consider it to be occupied, and that it is originally Syria territory and should be returned back to Syria. What the Israelis are trying to do with this buffer zone or with this Israel-friendly zone is, again, create distance between the Syrian government and where they’re based and where the Israelis are.In any future negotiations, this will only go further to cement Israel’s claim over the Golan Heights. Even now they’re using the argument of, ‘Syria’s unstable. It’s very unclear the direction that it’s going to go in. The Golan Heights that’s with us is stable. We’re investing. We’re helping the people. Why would after 50 years or even longer would we return it back to Syria? It should stay with us and it belongs to us.’ Having this zone or this area, again, puts distance between the Israelis and the Syrian government and its forces on the ground, which again helps serve their argument.

AARON MATÉ: I want to play a few of comment of Efraim Halevy. He’s the former head of Israel’s intelligence agency Mossad. He was interviewed by Al Jazeera and asked about Israel treating wounded Al-Nusra or Al-Qaeda fighters in Israeli hospitals. This is what he said.

Efraim Halevy: As I said before in a different context, it’s always useful also to deal with your enemies in a humane way.

Mehdi Hasan: You know better than me the phrase blowback. You don’t think there’s going to be blowback against Israel if you get into bed with a group like Nusra Front?

Efraim Halevy: Because I think that, unfortunately, the rules of the game in Syria are such that you can do anything that is not possible to be done anywhere else.

Mehdi Hasan: I think people said that in Afghanistan too. Would you also treat Hezbollah fighters?

AARON MATÉ: That’s Efraim Halevy, former head of Israel’s intelligence agency Mossad. He was speaking Al Jazeera’s Mehdi Hasan. Nour, interesting there that he dismisses the potential for blowback from Al-Nusra and also says that despite extolling the principal of treating your enemies, he wouldn’t treat Hezbollah. Just Al-Qaeda.

AARON MATÉ: Nour, on that point, a few days after your piece came out, the Wall Street Journal put out a report basically piggybacking on a lot of the reporting you did in your piece and reporting essentially the same things. They spoke to a spokesperson for the rebel group, Knights of the Golan, who said, “Israel stood by our side in a heroic way. We wouldn’t have survived without Israel’s assistance.”

NOUR SAMAHA: Yeah, I think that pretty much says it all. I think it’s interesting that there’s a group that can come out and say something like that when just literally a few meters away from where he’s standing the Israelis are still occupying his land. Apparently, they don’t have an issue with receiving money and weapons from the Israelis, so I think the entire situation is incredibly fascinating and somewhat bizarre because apparently occupation of land is okay in one area as long as the funding and the arms can keep coming to them.

AARON MATÉ: Nour, it’s said of Israel by some of its critics that it wants a regime change inside Syria, but a piece like yours, to me, indicates that actually, it’s pursuing a policy of just perpetual stalemates stoking fighting from the two sides. It’s been pointed out that if Israel really wanted to push regime change in Syria it could do more. It could, for example, send its forces to Syria’s southern border forcing Assad to divert his forces there and then away from the fight against rebels.On this point, I want to read you a quote from an Israeli intelligence officer who was interviewed in Politico recently talking about the situation in Syria and what the Israeli strategy is. This officer referenced what former Israeli Prime Minister Menachem Begin said about the Iran-Iraq war in the 1980s. Asked whether Israel supports Iraq or Iran in that conflict. The officer quotes Begin as saying, “I wish luck to both parties. They can go at it killing each other.” The officer goes on to say, “The same thing here. You have ISIS killing Al-Qaeda by the thousands. Al-Qaeda killing ISIS by the thousands, and they are both killing Hezbollah and Assad.”

NOUR SAMAHA: I don’t think that the Israelis are interested in a regime change. I think that there’s enough information coming from domestic think tanks inside Israel that indicate the same thing. They don’t want a vacuum in Damascus. It would incredibly problematic for them because, again, they would be dealing with a government or a state that they have no idea about. I think the opposition is fractured enough that it’s very unclear as to who could lead Syria in a post-conflict state. At the same time, they don’t want a strong Assad either, so it definitely serves their interest to have all of their enemies fighting each other on a playing field that they don’t even have to get involved in.Having ISIS and having Al-Qaeda, and having Hezbollah, and having the Syrian army, and having the Iranian forces all involved on the same battlefield and the Israelis aren’t there, I think they’re very happy sitting on the sidelines in that sense. I think, again, they don’t want to see … Like you said, they haven’t done enough inside Syria in order to really push for a regime change because it really isn’t in their interest. They’re okay with Assad staying in power, but as long as he’s weak. If he’s weak and if he’s answerable to people like the Russians or even the international community then that means there would be much more control over Hezbollah and the Iranians. This is something that the Israelis want. Like I said, they’re not looking for a vacuum there. They’re not looking for a vacuum. They’re looking for a very weak state.

AARON MATÉ: Nour, finally, your piece adds a new layer of detail to the understanding we have of the various foreign players who are involved in Syria. You’ve laid out for us a very detailed picture of what not Israel is doing inside Syria, along with many other countries, including the US, Russia, Iran, Turkey, the Gulf states, and so forth. Your thoughts as we wrap up on what it means for the Syrian conflict if all this foreign interference keeps going unimpeded?

AARON MATÉ: Nour Samaha, freelance journalist based in Beirut. Her latest piece for Syria Deeply is Israel’s Quiet Campaign to Gain a Foothold in Southern Syria. Nour, thank you.

NOUR SAMAHA: Thank you very much.