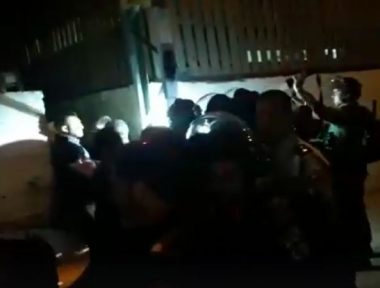 A Palestinian man, 65 years of age, was injured on Thursday evening, after Israeli soldiers stormed his home in Silwan town, in occupied Jerusalem, and abducted his son during a violent search of the property before hurling a concussion grenade at him. The soldiers also abducted a child during the invasion.

The Wadi Hilweh Information Center in Silwan (Silwanic) has reported that the soldiers stormed the home of Ziad Zidani, 65, in the al-Bustan neighborhood, before assaulting him and his family while ransacking the property.

It added that the soldiers hurled a concussion grenade at the man, striking him in his leg, causing various cuts and bruises.

The soldiers also invaded and searched many homes in the town, especially in the al-Ein Street, al-Bustan and al-Westa neighborhoods, installed many roadblocks and hurled concussion grenades at the residents.

In addition, the army abducted a child, identified as Mohammad Abu Rajab, from his home in al-Westa neighborhood.