Army Injures A Palestinian, Kidnaps Three Others Near Qalqilia 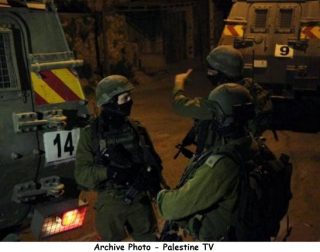 Israeli soldiers invaded, late on Friday at night, ‘Azzoun town, east of the northern West Bank city of Qalqilia, rammed one Palestinian with their jeep and kidnapped three others. The soldiers also kidnapped a woman in Tammoun.

The soldiers invaded the town from its eastern part, and drove in various neighborhoods while conducting provocative acts, before invading homes and searching them, and kidnapped three Palestinians.

The kidnapped have been identified as ‘Ayed Hussein Odah, 22, Mahiob Othman Odah, 19, and Mohammad Abdullah ‘Oweisat.

Medical said one Palestinian was injured after being rammed by a speeding army jeep, and was moved to a local hospital.

In related news, the soldiers kidnapped a Palestinian woman, identified as Suheir Ahmad Bisharat, from Tammoun town, south of Tubas, after stopping while trying to cross the Qalandia terminal, north of occupied Jerusalem.