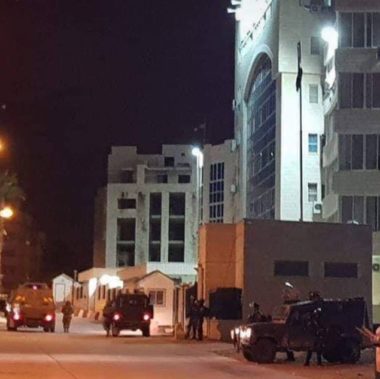 Israeli soldiers injured, on Tuesday evening, at least twenty Palestinians in al-Biereh city, in the central West Bank governorate of Ramallah and al-Biereh, during ongoing and escalating offensives allegedly aimed at locating the Palestinians, who shot and injured seven Israeli colonialist settlers, on Sunday evening.

The Palestinian Red Crescent Society (PRCS) in Ramallah said the soldiers shot twenty Palestinians, at least two of them with live fire, six with rubber-coated steel bullets, and twelve who suffered the severe effects of teargas inhalation, in the al-Irsal Street, in al-Biereh city.

The soldiers stormed and ransacked many homes and shops in the area, and confiscated surveillance equipment and recordings from several stores.

In invasions also targeted the al-Masayef area in al-Biereh, where the soldiers stopped and searched dozens of Palestinian cars, and interrogated the residents while checking their ID cards, in addition to inspecting surveillance recordings, and invaded many shops.

Protests also took place after dozens of soldiers invaded the area near the Palestinian Finance Ministry, and stormed a shop, before detaining its workers and confiscated surveillance recordings.

The soldiers fired dozens of concussion grenades and gas bombs, in addition to many live rounds and rubber-coated steel bullets at the protesters in the area, in addition to attacking local journalists, preventing them from performing their duties and threatening to abduct them if they do not leave.

Media sources in Ramallah said the soldiers are invading many shops, to examine the surveillance recordings and confiscate them, hoping to find any footage that could lead to the identification of the shooters, who opened fire at soldiers and settlers, near Ofra colony, wounding seven.

The Israeli army believes that the shooting attack near Ofra was carried out by cell, and not an individual shooting, adding that its operations are ongoing until locating the shooters.

The Israeli TV said the army has been carrying out massive invasions into the area, where hundreds of soldiers have been deployed to participate in the operations, and conduct thorough and extensive searches.

It added that the soldiers also detained four Palestinians from a store, north of Ramallah, but the army and the intelligence services have, so far, been unable to identify the shooters.