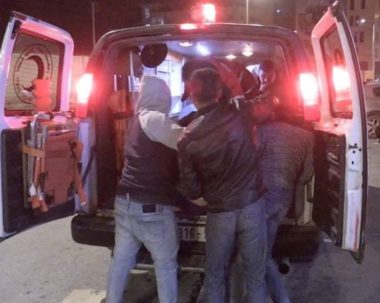 Israeli soldiers shot, on Tuesday evening, three Palestinians from Sarda village, north of the central West Bank city of Ramallah, as the soldiers were withdrawing from al-Biereh adjacent city.

The soldiers shot one Palestinian with a live round in his leg, while he was at a hilltop in the village, and the local medics eventually managed to find him and moved him to a hospital.

The soldiers also shot two other Palestinians with live rounds in Sarda, during protests that lasted for nearly six hours.

Dozens of Palestinians suffered the effects of teargas inhalation, in addition to various cuts and bruises.

It is worth mentioning that the soldiers also invaded a few homes, and occupied the rooftop of one of them, using it as a military port and a monitoring tower.