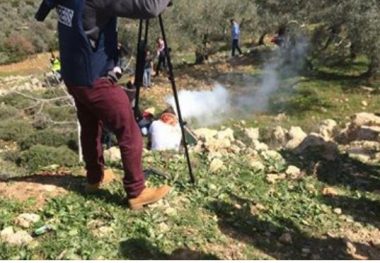 Israeli soldiers resorted, Friday, to the excessive use of force against nonviolent Palestinian protesters in the al-Mazra’a al-Gharbiyya village, west of Ramallah in central West Bank, injured dozens and detained many journalists.

Media sources in Ramallah said the protesters marched in the village, heading towards their lands, which were illegally confiscated by Israel for the construction and expansion of its colonies.

The soldiers resorted to the excessive use of force against the protesters, and fired may live rounds, gas bombs, concussion grenades and rubber-coated steel bullets.

Medical sources said the soldiers shot one Palestinian with a rubber-coated steel bullet, and caused dozens to suffer the effects of teargas inhalation.

The soldiers also attacked and detained many reporters and photojournalists and prevented them from documenting the unfolding events.

The head of the Committee against the Annexation Wall and Colonies, government minister, Waleed Assaf, said the protest comes against the ongoing attempts to complete a segregated road on Palestinian lands.

He added that the road leads to the illegal colonialist outposts of Ateret, Halamish and Telmon, and aims at linking them together by separating Ramallah from its suburbs, and isolates 4000 Dunams of Palestinian lands.

“We are practicing our right to nonviolent resistance, to defend our lands and property,” Assaf said, “We will continue our legitimate struggle against this illegal occupation and its colonialist activities.”

In related news, the soldiers blockaded the main entrance of Beita village, south of the northern West Bank city of Nablus, and declared it a closed military zone.