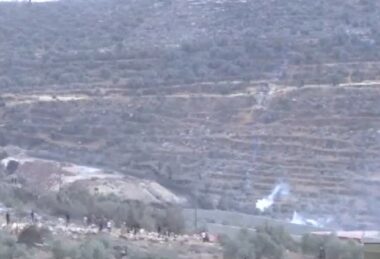 Israeli soldiers shot, Friday, several Palestinians, and caused dozens to suffer the effects of tear gas inhalation, during protests in Beita and Beit Dajan towns, south, and east of the northern West Bank city of Nablus.

Ahmad Jibril, the head of the Emergency Department at the Palestinian Red Crescent Society (PRCS) in Nablus, said the soldiers shot five Palestinians with rubber-coated steel bullets, including two who were shot in the head, and one who was shot with a sponge-tipped bullet to the head, in Beita.

Among the wounded is a photojournalist, identuified as Ala’ Badarna, who was shot with a rubber-coated steel bullet in the chest.

He added that three Palestinians were injured after falling while the soldiers were chasing them, in addition to 63 who suffered the effects of tear gas inhalation. Jibril also stated that the soldiers shot two Palestinians with rubber-coated steel bullets, and caused 27 to suffer the effects of tear gas inhalation, in Beit Dajan.

The Palestinians have been holding ongoing protests to defend their lands against the illegal and escalating Israeli colonialist activities, especially of the colonizers installed an outpost on Sbeih Mountain.