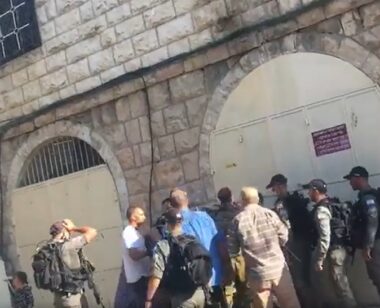 Israeli soldiers abducted, on Friday evening, two Palestinian siblings while Israeli colonialist settlers assaulted several homes, near the Ibrahimi Mosque in the Old City of Hebron, in the southern part of the occupied West Bank.

They added that the incident took place after a group of illegal fanatic Israeli colonizers attacked Palestinian homes in the area, while the soldiers stood and watched, before attacking the Palestinians, instead of removing the Israeli assailants, and abducted the two siblings.

The attacked homes are owned and inhabited by Palestinians from the local families of al-Mohtaseb, al-Beitar, Qfeisha, and Abu Hadid.

Several Palestinians were injured in the attack, mainly suffering various lacerations and bruises.

It is worth mentioning that the soldiers also caused many Palestinians to suffer the effects of tear gas inhalation near the permanent military roadblock at the entrance of Shuhada Street in Hebron.

The Israeli gas bombs also forced all Palestinian shops and stores in the area to close.