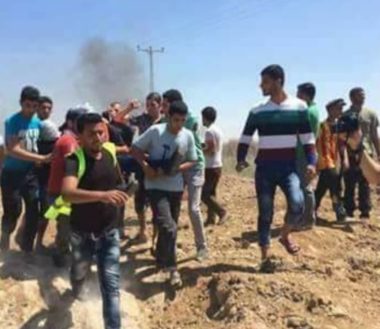 Israeli soldiers shot, on Wednesday evening, eight young Palestinian men, protesting east of Rafah, in the southern part of the Gaza Strip, Dr. Ashraf al-Qedra, the spokesperson of the Health Ministry in Gaza has reported.

The eight wounded Palestinians were rushed to Abu Yousef an-Najjar hospital in Rafah.

In related news, the army fired two missiles at an observation post, used by the Al-Qassam Brigades, the armed wing of Hamas, east of Rafah, causing damage.

The strike came as several Palestinian factions were meeting with Egyptian intelligence officials, visiting Gaza, to discuss the efforts to achieve calm along the border, in addition to the urgent devastating living conditions in the coastal region.

Since March 30, Palestinian refugees in the Gaza Strip — including families, women, and children — have gathered along the Israeli border to highlight their dispossession in 1948 and protest the growing humanitarian catastrophe.

Israeli forces have killed about 205 and injured 22,000 protesters, including women, children, disabled individuals, medics, and journalists, since the beginning of the Great Return March on Palestinian Land. Many have been shot in the back. Go here to learn the details of each death.