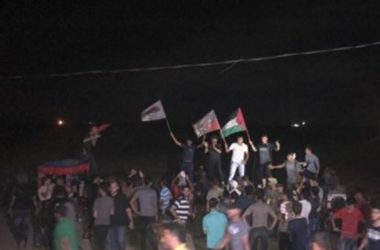 Medical sources said the soldiers resorted to the excessive use of force against the nonviolent protesters, on Palestinian lands near the perimeter fence, east of Deir al-Balah.

They added that the soldiers shot five Palestinians with live rounds, and caused dozens to suffer the effects of teargas inhalation.

The five injured Palestinians were rushed to the Al-Aqsa Hospital, in Deir al-Balah, while field medics provided the needed treatment to the residents who suffered the effects of teargas inhalation.

On Monday, the soldiers and the navy shot 29 Palestinians during a nonviolent flotilla procession from Gaza city shore towards the shore in northern Gaza, close to the Zikim Israeli controlled shore.

The Health Ministry in Gaza issued a statement denouncing the deliberate Israeli targeting of medics and ambulances with live fire, including the medical boats, and said that such violations are “acts of organized terrorism by the Israeli forces against medical teams performing their humanitarian duties.”