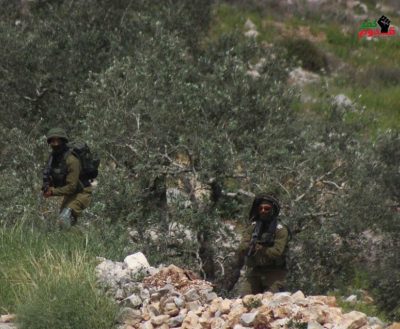 Israeli soldiers attacked, Friday, the weekly procession in Kufur Qaddoum town, east of Qalqilia in the northern part of the occupied West Bank, and injured five Palestinians, including a child and a cameraman working for Palestine TV.

Morad Eshteiwi, the media coordinator of the Popular Committee against the Annexation Wall and Colonies in Kufur Qaddoum, said the soldiers resorted to the excessive use of force and fired dozens of rubber-coated steel bullets, gas bombs and concussion grenades.

He added that the army injured five young men, including Palestinian TV cameraman Mohammad Enaya, and a child.

Two of the wounded Palestinians were rushed to Darwish Nazzal hospital, in Qalqilia, and the rest received treatment by local medics.

Furthermore, the soldiers invaded and ransacked many homes, and attacked several Palestinians.

Eshteiwi stated that the Palestinians will continue to protest the ongoing illegal Israeli occupation, its colonies and Annexation Wall, and will fight for their legitimate rights, until liberation and independence, and establishing a sovereign Palestinian state with Jerusalem as its capital. He added that the Palestinians will not surrender to this occupation, and will continue to resist it, and reject the illegal US recognition of occupied Jerusalem as the unified capital of Israeli, in direct violation of International Law and various United Nations and Security Council resolutions.