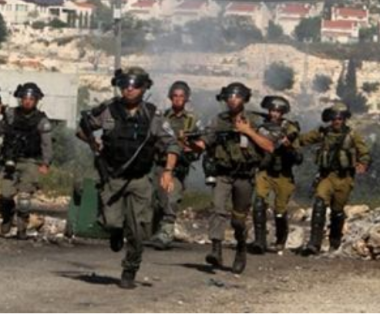 Israeli soldiers attacked, Friday, Palestinian and international nonviolent protesters, in Ni’lin village, west of the central West Bank city of Ramallah, causing many to suffer the effects of teargas inhalation.

Media sources in Ramallah said the soldiers attacked the protesters, as they marched from the village, heading towards the Palestinian orchards near the illegal Annexation Wall, and fired many gas bombs, concussion grenades and rubber-coated steel bullets at them.

The Israeli attack caused many to suffer the effects of teargas inhalation, before local medics provided them with the needed treatment.

The army also tried to ambush and abduct many protesters, fired gas bombs at several homes, and attempting to invade the village, before local youngsters hurled stone at them.

In addition, the Palestinian Health Ministry has reported that the soldiers shot at least 143 Palestinians, including 43 who were shot with live fire, three of them suffered very serious wounds, after the army attacked hundreds of protesters, marching near the border fence in several parts of the besieged Gaza Strip.

Furthermore, the soldiers shot three Palestinians with live fire, and caused dozens of suffer the effects of teargas inhalation, after the soldiers resorted to the excessive use of force against dozens of protesters, in Hebron city, the al-‘Arroub refugee camp, in addition to nearby Sa’ir and Yatta towns, in the southern part of the West Bank.

The soldiers also attacked and abducted five Palestinians, in the al-Manara junction, in Hebron city, and took them to an unknown destination.