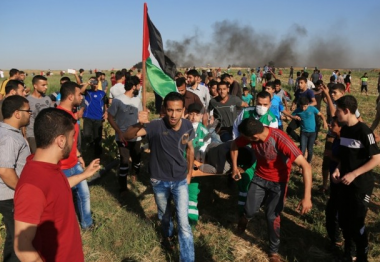 The Palestinian Health Ministry has reported that Israeli soldiers shot, Friday, at least 143 Palestinians, including 43 who were shot with live fire, three of them suffered very serious wounds, after the army attacked hundreds of protesters, marching near the border fence in several parts of the besieged Gaza Strip.

Dr. Ashraf al-Qedra, the spokesperson of the Ministry of Health, said the soldiers shot 43 Palestinians with live fire, including three who were shot by sharpshooters, and suffered life-threatening wounds, while at least 100 others suffered the effects of teargas inhalation.

Al-Qedra stated that the soldiers seriously injured two Palestinians, after shooting one in the with a live rounds in the head and another in his chest, east of Gaza city, and in Central Gaza.

He added that the soldiers moderately injured three other Palestinians, after shooting them with live fire, east of Jabalia, in the northern part of the coastal region.

Furthermore, one Palestinian suffered a serious injury, after the soldiers shot him with live fire in the abdomen, east of Khan Younis, in the southern part of the coastal region.

Another Palestinian suffered a moderately injury, after the soldiers shot him with live fire, east of al-Boreij, in central Gaza.

In Beit Hanoun, in northern Gaza, the army fired dozens of gas bombs at protesters, in Palestinian lands close to the border fence, while several youngsters managed to burn a military tower. Medical sources said many Palestinians suffered the effects of teargas inhalation.

Many army sharpshooters, and several armored vehicles, have been deployed near the border fence, near Abasan al-Jadeeda town, east of Khan Younis, and near Rafah city, especially at the Sofa crossing, in southern Gaza.