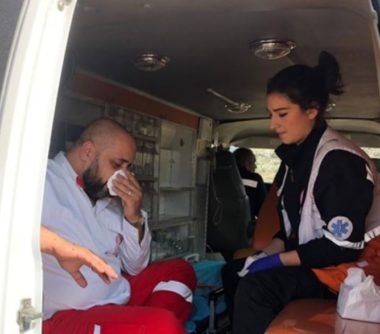 Israeli soldiers attacked, Friday, dozens of Palestinians while praying on lands Israel intends to illegally annex in Jabal ar-Reesan, west of the central West Bank city of Ramallah, wounding many of them, including a medic, and abducted three.

The Palestinians were holding Friday prayers on the lands in ar-Reesan Mountain, situated on lands belonging to the villages of al-Janiya, Ras Karkar and Kafr Ni’ma as part of a nonviolent procession against illegal Israeli annexation orders.

The soldiers fired dozens or rubber-coated steel bullets, gas bombs and concussion grenades to force the Palestinians away, before several many bullets struck an ambulance, causing damage, and wounding one medic.

Israel is trying to illegally confiscate the lands, owned by the Palestinians from the three villages, to use them for its colonialist activities and for military purposes.