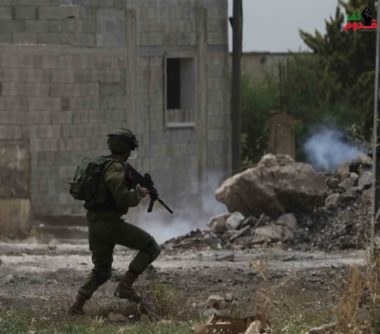 Israeli soldiers attacked, Friday, the weekly procession against the illegal Annexation Wall and colonies, causing many protesters to suffer the effects of teargas inhalation.

Morad Eshteiwi, the media coordinator of the Popular Committee in Kufur Qaddoum, said the protest started from the center of the village, where the protesters marched carrying Palestinian flags, and chanting against the ongoing illegal Israeli occupation of Palestine.

He added that the soldiers resorted to the excessive use of force against the protesters, and fired many gas bombs, concussion grenades and rubber-coated steel bullets at them.

The soldiers also invaded and ransacked a few homes in the town, and occupied their rooftops, before using them as firing posts.

Several Palestinian youngsters protested the invasions, and attacks, and hurled stones at the soldiers, in addition to burning tires.

Medical sources said dozens of residents suffered the effects of teargas inhalation, in addition to cuts and bruises.