Army Injures Many Palestinians In Ramallah 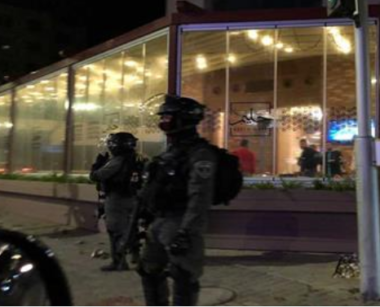 Israeli soldiers injured, on Thursday at night, many Palestinians in the al-Masyoon neighborhood, in the central West Bank city of Ramallah, after several army jeeps invaded it, and fired many live rounds, rubber-coated steel bullets, gas bombs and concussion grenades at local protesters.

The WAFA Palestinian News Agency said the soldiers invaded the neighborhood from several directions and added that many Palestinians suffered the effects of teargas inhalation, including families who were in their homes.

The protesters hurled stones, and a few Molotov cocktails, at the invading army jeeps, WAFA said.

The soldiers closed the main road leading to the hotel, in addition to sealing all roads leading to Rafat village, south of Ramallah.