Army Injures Many Palestinians, Including A Journalist, Near Ramallah 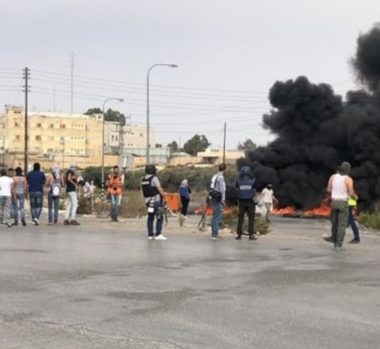 Israeli soldiers attacked, Monday, dozens of protesters at the northern entrance of the al-Biereh city, in the Ramallah and al-Biereh governorate in central West Bank, shot a journalist with a rubber-coated steel bullet, and caused many Palestinians to suffer the effects of teargas inhalation.

The Palestinians were protesting at the northern entrance of al-Biereh city, near Beit El colony and security center, and chanting against the ongoing illegal Israeli occupation, and so-called “Israeli Nationality Law.”

In related news, the soldiers shot three Palestinians with rubber-coated steel bullets, and caused many to suffer the effects of teargas inhalation, after the army resorted to the excessive use of force against protesters marching in Kufur Qaddoum town, east of the northern West Bank city of Qalqilia, against the Israeli legislation, and in solidarity with the families of al-Khan al-Ahmar facing displacement, and the demolition of their community.

In occupied Jerusalem, the soldiers invaded the al-‘Ezariyya and Abu Dis towns, and attacked Palestinian protesters, wounding five with rubber-coated steel bullets and causing ten others to suffer the effects of teargas inhalation. The army also attacked protesters in Jabal al-Mokabber, in East Jerusalem.

It is worth mentioning that Palestine witnessed a general strike in protest of the law, which ignores the basic rights of the indigenous Palestinian people, and states that the right to self-determination is only for the Jews, including instant citizenship rights to Jews immigrating to the country from several parts of the world, in addition to “reaffirming the status of unified Greater Jerusalem as the capital of Israel,” in addition to recognizing Hebrew as the sole official language of the country.

The general strike was held in every part of Palestine, to emphasize the Palestinian unity and their rejection to the law which strips the native indigenous Palestinian people from their basic rights in their own land.

The “Law” also undermines and ignores the right of approximately 20% of the population of Israel (nearly 1.8 Million Palestinians), confirming and defining Israel as the “historic homeland of the Jewish people, who are the only ones to have the exclusive right to self-determination.”