Updated: Army Injures Dozens Of Palestinians, Including Journalists, Near Nablus 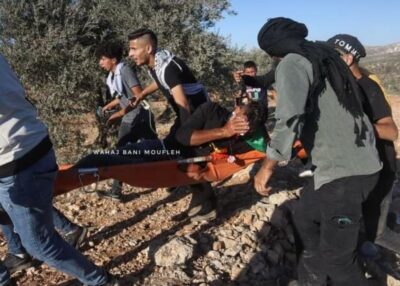 On Friday afternoon, Israeli soldiers injured many Palestinians, including journalists, during processions in Sbeih Mountain in Beita town, south Nablus, and in Beit Dajan village, east of the city, in the northern part of the occupied West Bank.

The PRCS said 5 Palestinians were shot with rubber-coated steel bullets, 2 were shot with gas bombs, six were injured after falling while the soldiers chased them, one was injured by glass fragments, and fifty-seven suffered the effects of tear gas inhalation.

One of the wounded journalists has been identified as Abdullah al-Bahsh, who was shot with a rubber-coated steel bullet in the shoulder. The second injured journalist, Ja’far Eshteyya, who works from the French Press Agency, was shot with a rubber-coated steel bullet in the arm.

The PRCS added that six Palestinians were also injured after falling when the soldiers chased them during the procession.

The Palestinians gathered on Sbeih Mountain at dawn after Israeli colonizers announced their intention to invade the mountain in large groups.

In Beit Dajan, east of Nablus, the soldiers attacked the weekly procession before shooting two with rubber-coated steel bullets, in addition to causing at least fourteen to suffer the effects of tear gas inhalation.

The soldiers attacked and injured many Palestinians on Friday at dawn while holding dawn prayers on their lands near Sbeih Mountain in Beita.