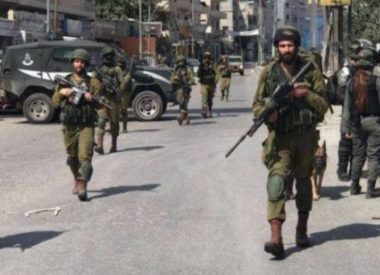 Israeli soldiers injured, Sunday, many Palestinians in the al-‘Arroub refugee camp, north of Hebron, in the southern part of the occupied West Bank.

Media sources in Hebron said the soldiers invaded the refugee camp, and fired many gas bombs and concussion grenades in its streets, alleys, and several homes, causing dozens of Palestinians to suffer the effects of teargas inhalation.

They added that several Palestinians protested the military invasion into the refugee camp, and added that the soldiers also closed its entrance, preventing the residents from entering or leaving it.

The soldiers also closed the gates of Palestine Technical University (Kadoorei), al-‘Arroub Branch, and prevented the students from entering or leaving it.