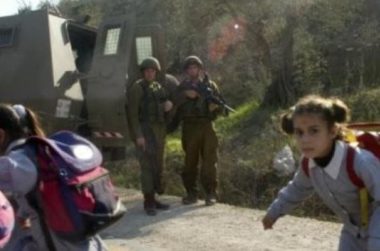 Israeli soldiers detained, on Sunday morning, three schoolgirls from Betunia Basic School, west of Ramallah, in central West Bank, and threatened to attack any person who approached them after placing them in their jeep, and released them shortly afterwards.

The Palestinian Ministry of Education denounced the ongoing Israeli violation, and military harassment against the schoolchildren.

The three schoolgirls, in the sixth and seventh grades, were forced into a military jeep, without any cause of justification, and were screaming and crying, while the soldiers also terrified other school girls by threatening to abduct them, or shoot them if they do not leave the area.

Eyewitnesses said the soldiers released the schoolgirls shortly after detaining them, and left the area.

Israeli ongoing violations against Palestinian children are ongoing breaches of various international law, and human rights agreements, including the United Nations Convention on the Rights of the Child, especially Article #16, which states that “1. No child shall be subjected to arbitrary or unlawful interference with his or her privacy, family, home or correspondence, nor to unlawful attacks on his or her honor and reputation. 2. The child has the right to the protection of the law against such interference or attacks.