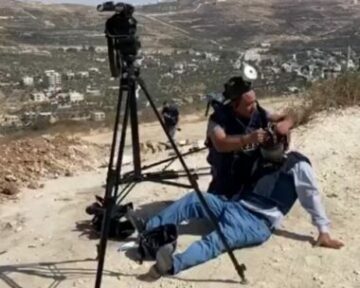 Israeli soldiers attacked, Friday, many Palestinians while plowing their lands in ‘Asira al-Qibliya village, south of the northern West Bank city of Nablus, during a nonviolent activity meant to protect private lands which Israel intends to illegally confiscate for it colonialist activities.

Hafeth Saleh, the head of Asira al-Qibliya Village Council, told the WAFA Palestinian News Agency that the Palestinians were plowing their farmlands, close to the Yitzhar illegal colony, which was built on stolen Palestinian lands.

Saleh added that the soldiers fired a barrage of gas bombs and concussion grenades at the Palestinians, wounding three young men, who were directly hit with the high-velocity gas bombs, and causing many others to suffer the effects of teargas inhalation.

One of the wounded young men was shot in the face, and the second was injured in the chest and the third in the leg, before medics provided them with the needed treatment and rushed them to a hospital in Nablus.

Many other residents, including one journalist, identified as Adel Abu Ni’ma, suffered the severe effects of teargas inhalation, in addition to cuts and bruises, before the medics provided them with the needed treatment.

It is worth mentioning that many Israeli colonists also attacked the Palestinians, in addition to invading the outskirts of the village, and hurled stones at them, while the soldiers were assaulting the residents during the nonviolent activity.