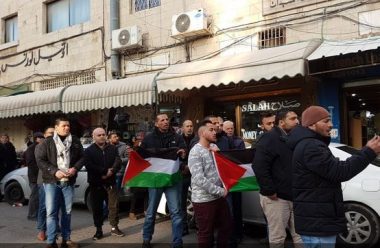 Israeli soldiers attacked, Saturday, dozens of Palestinian nonviolent protesters in Salaheddin Street, in occupied East Jerusalem, and fired many gas bombs and concussion grenades at them, wounding seven, and abducted one.

The Wadi Hilweh Information Center in Silwan (Silwanic) has reported that the soldiers assaulted nonviolent protesters, holding ongoing protests against Trump’s illegal recognition of occupied Jerusalem as the unified capital of Israel.

It added that the soldiers injured seven Palestinians in their upper and lower limbs, and that one of them in a photojournalist, identified as Fayez Abu Romelia.

Also, among the wounded are two women, and one child, who received treatment by medics in the town.

Furthermore, the soldiers assaulted a young man, identified as Abed Barbar, causing various cuts and bruises, before abducting him, and moved him to an interrogation center in Salaheddin Street.

The army also confiscated many Palestinian flags, and signs, from the protesters after assaulting them, Silwanic said.