Army Injures Several Palestinians, Including A Teen In Serious Condition, In Gaza 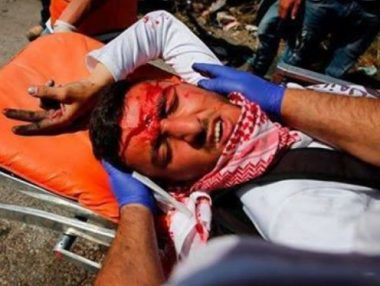 Israeli soldiers shot and injured, Friday, many young Palestinian men, including a teenager who suffered life-threatening wounds, during clashes that took place in several parts of the besieged Gaza Strip.

Medical sources said a teenage boy, 16 years of age, suffered a serious injury after the soldiers, stationed across the border fence, shot him with a gas bomb in the head, during clashes that took place in Jabalia, in the northern part of the Gaza Strip.

The sources added that the soldiers also targeted several ambulances and medics, during their attempts to provide aid to wounded Palestinians.

More clashes took place between the soldiers, also across the border fence, near Nahal Oz military base, when the army fired many live rounds at the protesters, wounding two young men in their legs, before medics rushed them to the Shifa medical center, suffering moderate wounds.