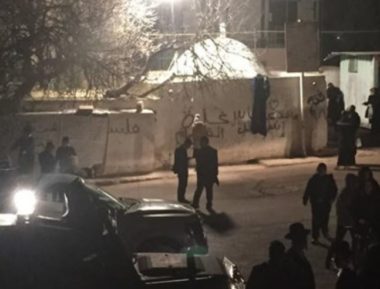 Israeli soldiers invaded, on Sunday at night, Deir Abu Mashal village, northwest of the central West Bank city of Ramallah, and attacked dozens of protesters, causing many to suffer the effects of teargas inhalation.

Media sources in Ramallah said the soldiers fired many gas bombs at protesters, and many surrounding homes, causing scores of Palestinians to suffer the effects of teargas inhalation.

The soldiers also fired many rubber-coated steel bullets and concussion grenades at dozens of youngsters, who protested the invasion, and hurled stones at the military vehicles.

The army claimed that the invasion into the village was carried out after some Palestinians reportedly hurled stones at settlers’ cars, driving on the nearby bypass road.