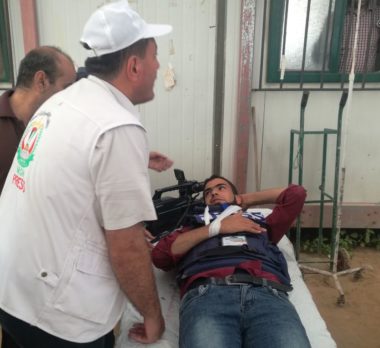 The Palestinian Health Ministry has reported that Israeli soldiers injured, Friday, sixteen Palestinians during the Great Return March processions, ongoing for the 59th week, in the besieged Gaza Strip.

The Health Ministry in Gaza said the injuries varied between rubber-coated steel bullets and gas inhalation, including some who were shot with high-velocity gas bombs.

It added that a journalist, and a female medic volunteer, were among the injured Palestinians.

All the wounded Palestinians received the needed treatment in make-shift clinics, without the needed to move them to hospitals.