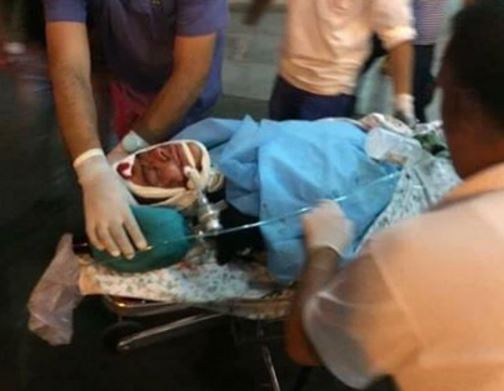 Dozens of Israeli soldiers invaded, on Saturday evening, the al-Jalazoun refugee camp, north of the central West Bank city of Ramallah, and shot at least twenty Palestinians, including a child who suffered a serious gunshot wound to his head, during clashes that erupted after the invasion.

Medical sources said two Palestinians were shot with live army fire; one of them is a 16-year-old child, who was shot directly in the head, while the other is a young man who was shot in his back.

The child, identified as Fares Ziad al-Bayed, 16, is currently in a very serious condition at the Palestine Medical Complex in Ramallah, the Palestinian Health Ministry said.

At least 18 Palestinians were shot with rubber-coated steel bullets, three of them suffered moderate wounds that required hospitalization, while the rest received the needed treatment by local medics.

An Israeli army spokeswoman confirmed the use of live fire by the soldiers, and claimed she was “aware of reports of injuries, but unable to confirm them.”

She added that Palestinian protesters hurled Molotov cocktails and firebombs at the soldiers, near the entrance of the refugee camp, and the “the army responded with live fire.”

The Palestinians in the camp were commemorating the first anniversary of the death of Ahmad Sharaka, 13, who was shot by an Israeli army bullet in the neck on October 11, 2015.