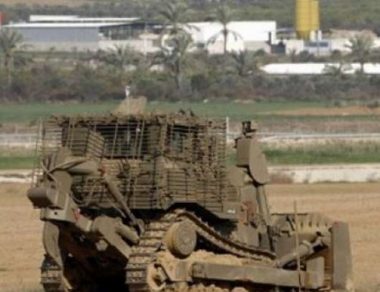 On Thursday morning, several armored Israeli army vehicles, and bulldozers, carried out a limited invasion into Palestinian lands, southeast of Khan Younis, in the southern part of the Gaza Strip.

Eyewitnesses said the military vehicles left the Sofa army base, across the border fence, and invaded Palestinian agricultural lands, east of the al-Fakhari town, northeast of Khan Younis, and started bulldozing sections near the fence.

They added that the soldiers fired many rounds of live ammunition, while military drones flew overhead.

In related news, Israeli navy ships opened fire on a number of Palestinian fishing boats, north of Gaza city, forcing the fishermen back to shore without being able to fish and provided for their families.