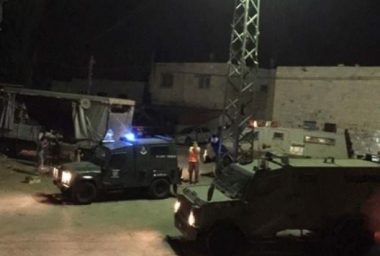 The Israeli military completely surrounded and isolated, on Friday evening, the town of Halhoul, north of the southern West Bank city of Hebron, as a collective punishment measure against the entire town, after a Palestinian boy attacked and mildly injured two colonist settlers, earlier in the day.

The Palestinian has been identified as Ezzeddin Ibrahim Karja, 17, from Halhoul. The soldiers shot him with several live rounds, causing serious wounds.

The Israeli army said that it decided to impose a siege on the town, “after assessing the security situation,” and that Karja’s family has been summoned for interrogation.

Lawyer Karim ‘Ajwa, of the Palestinian Detainees’ Committee, stated that Ezzeddin was still in a very serious condition at the Intensive Care Unit in Hadassah Israeli Medical Center in occupied Jerusalem.