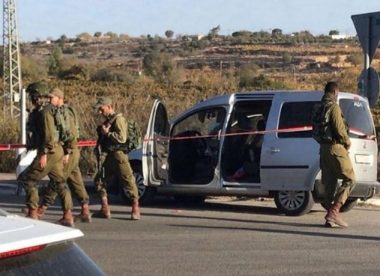 Israeli sources have reported, on Friday morning, that a Palestinian allegedly rammed and injured two Israeli settlers with his car, at Efrat Junction and Gush Etzion Junction, south of Bethlehem in the occupied West Bank, and drove towards Israeli soldiers before they shot him, causing serious injuries.

Update: The Palestinian has been identified as Ezzeddin Karaja, 17, from Halhoul town, north  of Hebron, in the southern part of the occupied West Bank.

Karaja has been placed in Ramla Prison clinic, which lacks basic supplies and has no specialized physicians, where he is facing serious complications for his injuries, and is likely to have his leg amputated.

According to a statement by the Israeli army, the Palestinian first rammed a settler at the Efrat South Junction, and continued driving towards nearby Gush Etzion Junction, where he rammed another Israeli.

Israeli daily Haaretz said that the Palestinian then exited his car, and reportedly ran towards a group of soldiers at Etzion Junction, “in an attempt to stab them,” but they shot him inflicting serious wounds.

Haaretz added that the settler who was injured at the Efrat Junction is an elderly male, identified David Ramati, 70,  and suffered a mild injury, and that the second is also a male, 35, who suffered serious  wounds.