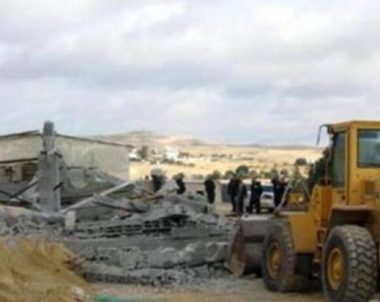 The Israeli army demolished, Thursday, the Bedouin village of al-Arakib, in the Negev desert, for the 121st time, rendering all families homeless, yet again. The village was demolished 121 times, while the latest demolition before this one was carried out on October 25.

The village has been under constant invasions, and demolitions; its inhabitants have land deeds and receipts of paid taxes dating back to Ottoman times, but the Israeli authorities do not accept these as valid.

The figures above are only for the August demolition, in addition to all accumulated costs of the ongoing Israeli demolition and destruction of the village since 2010, with a cumulative cost of approximately 1,902,607 Shekels (541,000 USD).

There are 35 Bedouin villages that are not recognized by Israel; nearly 160.000 Bedouins live in “unrecognized” villages in the Negev, built before 1948, but remain “illegal” under Israeli law and face constant demolition and displacement.

The plan calls for annexing more than 700.000 Dunams (185329 acres) and displacing the residents by demolishing 14 villages in the area. Al-Arakib village is one of the most impacted “unrecognized villages” in the Negev.

All unrecognized villages in the Negev are under continuing Israeli attacks and violations, as Tel Aviv does not recognize the residents’ right to live on their land — land they inhabited before the 1948 creation of the state of Israel in historic Palestine.