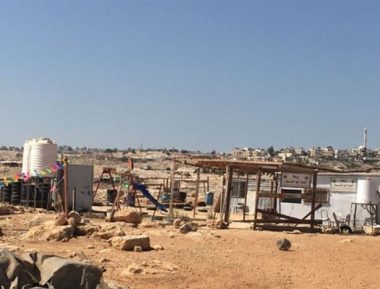 Israeli Prime Minister Benjamin Netanyahu has decided to displace and remove dozens of Palestinian Bedouin families living in their communities around occupied East Jerusalem, after deeming their dwellings as “illegal,” to replace them with colonists.

His decision was made after meeting with representatives of the so-called “Jerusalem Belt Forum,” which is actively involved in displacing the Palestinians and replacing them with Israeli colonist settlers, in direct violation of International Law.

The group aims at removing the Palestinians, their residences and dwellings, near Maale Adumim colonies, and held their meeting with Netanyahu, on Thursday evening.

Israeli National News has reported that the meeting was also attended by officials of Netanyahu’s office, in addition to Boaz Ido, who is a board member “Jerusalem Belt Forum,” the head of the Benyamin Regional Council of Settlements, Roni Snir, the head of Gush Katif Council, Danny Tirza, Field Coordinator Yaniv Aharoni, and Kfar Adumim resident and ‘social activist’ Avichai Shurshan.

The group presented Netanyahu with what they called “activities and achievements,” in addition to maps and aerial photographs of constructions in Bedouin communities, financed by the European Union.

The indigenous Palestinians in that area live in tents, mobile homes and several structures, in the area between Maale Adumim and Mitzpe Yeriho colonies.

Israeli Ynet News said that Netanyahu ordered the removal of what was described as “illegal outposts,” and to relocate the inhabitant in Abu Dis town, near Jerusalem, and Jericho.

The Arabs48 news website has reported that Israel is trying to displace what is left of the Bedouin communities in occupied Jerusalem to build and expand its illegal colonies, and link Maale Adumim with Jerusalem.

Israeli National News has reported that Netanyahu ordered his office, the police and the military to increase their deployment and enforcement, and to ensure the removal of the Palestinian communities, dubbed as “illegal outposts.”

On its part, the “Jerusalem Bely Forum” said after the meeting with Netanyahu that they “congratulate him for his willingness to resolve the problems presented to him, regarding the illegal construction carried out by European Funding,” referring to EU projects that tries to help in creating basic infrastructure and to improve the lives of the communities.

It is worth mentioning that the so-called “Jerusalem Belt Forum,” a heavily financed group active in the illegal construction and expansion of Israeli colonies, has been conducting various campaigns to stop what it refers to as “illegal Palestinian constructions,” and to remove the Bedouin committees to “house them in a Bedouin village near Jericho.

Bedouins living around Jerusalem, reside in Area C of the occupied West Bank, and are protected inhabitants under International Law, International Humanitarian Law, and all related protocols and agreements, but are constantly displaced, similar to what is happening in the Negev.

Israel’s colonies in the occupied West Bank, including in and around occupied East Jerusalem, are illegal under International Law and the Fourth Geneva Convention.

On Friday at dawn, Netanyahu ordered the army to remove all Bedouin Palestinians living in their communities, close to Road #1, leading to the Dead Sea.

The army also handed eviction orders to the Bedouin families in Jabal al-Baba area, near al-‘Ezariyya, east of Jerusalem, ordering them to leave dwellings they inhabited for more than fifty years, after they were displaced from the Negev.

Arabs48 quoted resident Atallah al-Jahalin stating that he was born there 43 years ago, in the same dwelling were 57 families, half of them children, reside.