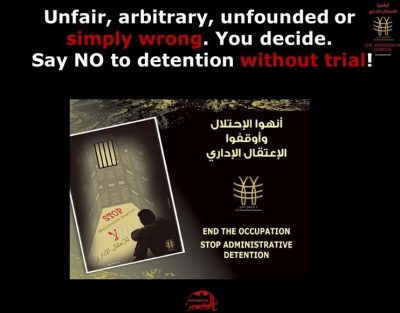 The Palestinian Prisoners Society (PPS) has reported, Thursday, that the Israeli authorities have issued Administrative Detention orders against 24 Palestinian political prisoners, including one woman, since the beginning of this month, holding the detainees’ captive without charges or trial.

The PPS stated that the female detainee, Bushra Tawil, from al-Biereh city, received a six-month Administrative Detention order, and that she is a former political prisoner, who was abducted and detained by the army, and was re-arrested on November 1st.

It added that ten of the detainees have received these orders for the first time, or were former political prisoners, who were arrested again and placed under Administrative Detention.

The new orders have been issued against the following detainees: