Israeli Soldiers Demolish A Home, Hand Demolition Order Against Another, Near Ramallah 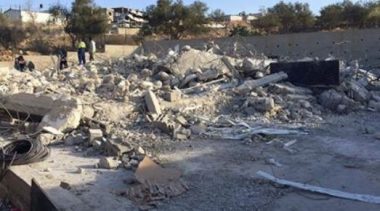 Israeli soldiers invaded, on Thursday at dawn, the village of Ni’lin, west of the central West Bank city of Ramallah, demolished one home, and handed a demolition order against another home.

The WAFA Palestinian News Agency has reported that the soldiers demolished the home of Mohammad Adel Awad, in the al-Mhallel area, in Ni’lin, rendering him and his six other family members homeless.

It added that the family only managed to remove some of their furniture and belongings, before the soldiers leveled their homes.

The army also handed a demolition order against a neighboring home, under the pretext of being built without a permit.

It is worth mentioning that, prior to Israel’s establishment in the historic land of Palestine in 1948, Ni’lin was part of Ramla governorate, and then became part of Ramallah and al-Biereh governorate, in central West Bank, after Israel confiscated more than %60 of its lands and depopulated most of its inhabitants, who became externally displaced refugees.